The different modes of energization are applied in a kirlian-photo to obtain corona discharge field, engendering the luminescence of a researched object. The most of researchers prefer to use the mode of multipulse or high-frequency energization. It is important the multipulse method gives an aggregate pattern. The resulting photo is a sum of pictures obtained as a consequence of separate pulses. In practice, this co-operative pattern, quite satisfactorily mirrors quality of our bio-energetics. However, pattern of a true initial state, all thin material substances and formations, dynamics of their behavior, and energetic-informational pheno-flash or pheno-reflex occurring at a field level are destroyed and masked by an abundance of exciting impulses. It disappears from field of view of a researcher.

Really, field of a corona discharge impacts not only an object of research. Everything presenting in a zone of electric field react to effect of the discharge. Obviously, after the first impulse the energetic-informational situation of researched space changes. Each subsequent impulse gives additional changes.

Use of a monopulse mode gives two advantages. First, the method causes minimum negative (irritating) effect on a bioenergetics of a patient. Second, it gives an opportunity to glance more deeply into a world of thin energy, extra-agile processes, and phenomena. It allows to fix it on a film. They are quite numerous and multivarious. Some of them are represented below.

These plasma structures (photo 1) frequently constitute chains (a) or clump (b) in a zone of a corona discharge and away from it (c). Cores of plasmoids, enveloped by the flashing shell of ionization gas (d), are well visible if the picture is sufficiently enlarged. The initial assumption of random electrostatic discharges was not confirmed by testing experiments. In some cases these plasma structures are result of emission from within. They appear as a result of destruction of a psi-energetic matrix of subject. In fact, they are fragments of the matrix’s decay. The visual example is given in a photo 2. Plasmagraphic impression of a psychic's finger, who stays in a relax state, is shown on the left. When he " log-ons in contact ", the picture changes (on the right). We see destruction of integrity of the crown and appearance of plasmoids.

Deformations of a luminescence crown are very interesting. They look like diffluent drops (photo 3a). The most often these deformations appear in a zone of contact of a finger with a film. It is possible to explain the deformations by presence of stranger derivations or formations. It is interesting, similar manifestations did not appear again while repeating photography. Probably, they are instantly destroyed by the first impulse, derivating myriad of plasmoids (photo 3b), or hasty volatilize. A question appears, what do they need near fingers? It is a place, where there are beginning and ending points of energy channels. Do that formations parasitize on our energy system?.. By the way, recall how frequently and carefully shake off hands healers while operating with the patient. Do these invisible parasites cling to their fingers?.. If it is true, that the numerous talks about " energy vampirism " have real confirmation.

There is another group of abnormal phenomenons. They are registered remotely, at a field level. All of them have the same mystery feature. They are always developed on a back side of a film (photo 4). X-ray film, that I use, has a photosensitive emulsion layer on both sides. It is important to note, the phenomenon always appears on a background of the depressed bio-energetics of the patient. Numerous experiments allow to conclude the phenomenon is stipulated by presence of some invisible, "phantom" substance or processes, which are reflected at field level. The negative effect of this illusive substance on bio-energy system is the obvious fact. During rehabilitation of the bio-energy system infected by such specific "virus" it was remarked, that initially the mysterious substance becomes engendered. Then the substance disappears and the bio-energy system becomes clean (Photo 5).

I believe, many people are familiar with a following situation. A psychic speaks that all patient’s channels are littered. Is it that very illusive substance (photo 4c)? Another question appears. What it does here?.. Above I expressed already an assumption about the unbidden visitors, which parasitize on a bio-energetics. But here I am talking about substances or processes, which "work" at a field level. It gives a firm basis to speak about reality of remote energetic-informational effects, including negative, which the people are named as malefice and voodoo.

There is another experiment, which demonstrates visually an aggressive character of the substance. The purpose of the experiment is to detect an ability of the illusive substance to transfer from one subject to another. In this experiment a role of "another", that is role of "the recipient " the author took himself. Result you can see on a photo 6.

Bio-energy of the author before experiment.

After 2 -minute "remote contact " the phantom substance migrated onto my fingers, and my energetic became “infected”.

The idea of a diversity of the forms of life is not new one. Long time ago Tsiolkovskiy said about inhabiting of space by alive substances of a plasma nature. Now an academic Kaznatcheyev states presence of not biological, but field forms of life.

We see the photos. Maybe, today the photos provided practical acquaintance with these "other forms"? Certainly, it must be carefully researched and for studied. We have to argue, to reject, to prove... But it is obvious, that monopulse plasmagraphy, as well as other sorts of a kirlian-photo, has a promising perspective and opens new horizons in energetics researches. 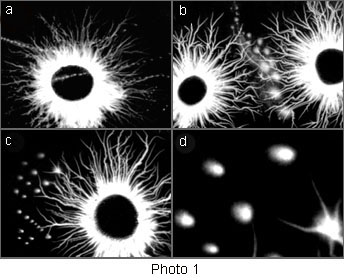 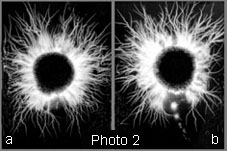 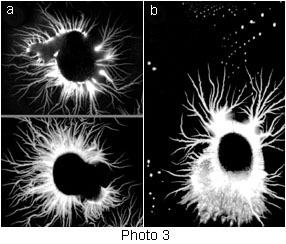 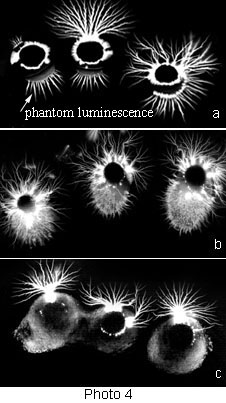 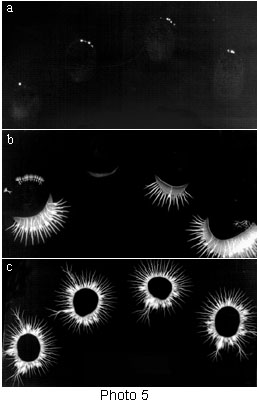 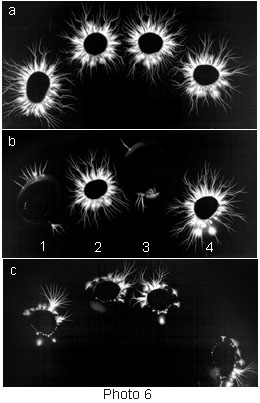